Sunday Surfing is my weekly feature (inspired by Chrisbookarama‘s Friday Bookish Buzz, which is one of my favourite features) where I share my favourite links from during the week, about books and blogging. Plus a little about what’s happened on the blog this week.

Apparently I haven’t posted a Sunday Surfing for six months (thanks for that jolt of reality wordpress) so I’m posting some older links too.

Around the web this week

The most borrowed library books in the UK

Reading for pleasure could make you happier

Popular names invented by authors -I don’t get the whole call it a baby name thing, it’s not like we shed names as we grow up)

Simon and Schuster are releasing an imprint for Muslim children’s books -don’t really get why it needs a separate imprint but it’s good that they are trying to get more books with non-white children.

And on the blog this week…

I talked about the ballet of Raven Girl

I reviewed Why Not Me?

Tagged as around the web, internet, links, news, sunday surfing, this week

BBAW: What Book Blogging Means to Me

I’m taking part in Book Blogger Appreciation Week this week, and today we’re all looking at what book blogging means to us.

I started this blog just over three years ago (my blogiversary was at the end of August) but I’ve had a bookish presence online for quite a lot longer than that. Firstly it was more about Harry Potter, I am a member of The Chamber Of Secrets Forums where I used to spend a lot of time. I’m not going to go into the relations between my online life and Harry Potter (it would just make this post last forever) but I have made a post on it in the past that you can read if you are interested.

Really though by book blogging life started with The Book Club Forum where I had my own thread for book reviews, as well as joining in with discussions about books. Quite a few members on there have their own blogs and my thread eventually became Lucybird’s Book Blog.

I discovered the wider book blogging community through the book blogger hop (hosted by Jennifer @ Crazy for Books) which one of my forum friends took part in. That’s when I really got going.

Well that’s my favourite thing about book blogging really. Discovering new blogs, and with it new books. I’ve read some really fantastic books thanks to other bloggers. I’ve discovered different blogs. I’ve found inspiration for my musings posts from things other bloggers have written, and from comments and conversations started in different posts I’ve made. I got introduced to twitter, which is just a fantastic way to meet new bloggers- and to find out about blogging events.

Ultimately blogging for me is about sharing my love for books with the world. I hope I inspire people to read with my reviews and/or posts- or even just help them to find a book they love. 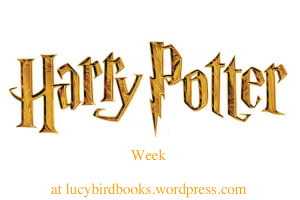 I can’t believe it’s the end of Harry Potter Week already! This was fun. Today is a bit more personal. I want to talk about my relationship with Harry Potter, it really feels like the end of an era, Harry Potter has been more that just a book series for me, it’s been a part of life. Yes maybe it’s time to let go but sometimes things aren’t that easy.

Oh I remember looking for another book by Rowling (hoping it would be about Harry) for what felt like months and months. I think Chamber of Secrets may have actually been out by then seeing as I am far from having a first edition, but maybe my local Waterstones (or was it Dillons back then?) didn’t have it in stock? It wasn’t the most well known book then (although J.K. was already a double Smarties Award winner) but I for one wanted it. I am sure the anticipation for Chamber of Secrets has actually contributed somewhat to it being one of my favourite Potter books.

Lets skip forward a few years. I happily read Prisoner of Azkaban, managing to get hold of that one fairly early on. Then the hype started Goblet of Fire was released on the 8th July 2000 (wow was it really that long ago?!)  and the preceding months it was mentioned on TV (I remember first realising that my favourite books were actually really popular after seeing a report on Newsround), and advertised for pre-order everywhere! I ordered it from a local bookshop, it was a shop I passed everyday so why not? That was a really good idea, they didn’t seem to get the idea of a release date but phoned me as soon as the book came through, a day before it was released. Of course I had to start it straight away, and I was a good 100 pages in before most other people even had the book- it’s one of my favourite stories! I remember coming in to school the next day and people asking me questions about what they had read, thinking I would have the answers seeing as I had read so much more.

This is around about the time I started getting into fandom a little. I wasn’t the most popular of girls at school, a little geeky and awkward, incredibly shy, I never really felt I fit in. Yes I had friends but I still spent lots of time in the library and in the I.T rooms. Reading and Harry Potter was a real escapism for me, it was almost like another friend, and the internet gave that distance and anamosity which meant I didn’t have to be shy, if I embarrassed myself who cares? I could just disappear and nobody would know who I was. Maybe it was a bad way to deal with things but I think it’s part of what makes me who I am today. Yeah I’m still pretty shy but I’m much more comfortable with myself, and I do think the internet helped with that. There is something with the internet community that is very accepting, everyone is there and it’s so easy to find a group where you feel like you.

I started off on the (now closed) Bloomsbury Harry Potter forums, which were the most basic of forums ever, no log in, just write your name in a little box under your comment, no comment threads, just endless comments on random topics. Completely crazy forum, partly for that reason, when it got boring we used to pretend to be other people. After a while it got closed down just because it was a moderating nightmare. For a while I drifted around the internet then I hit upon Mugglenet, complete Mecca of Harry Potter fandom, at that time Mugglenet still had a link to their once official forums the Chamber of Secrets Forum and that’s where I ended up, sometime after the release of Order of the Phoenix. After the Bloomsbury forums the Chamber of Secrets Forum was like a maze, every possible theory, what felt like hundreds of people all talking about Harry Potter. I must admit the actual Harry Potter threads were somewhat daunting and I actually spent almost a whole year barely visiting them but just chatting in the chat threads, I’m still in semi-contact with people from that time even though most of us no longer visit the forums. Gradually I  started participating in more and more Harry Potter discussions till it came to a point that for the release of Deathly Hallows I actually went to London to meet with people I had met on Chamber of Secrets Forum.

I still visit the forum occasionally, but now the series has ended it doesn’t hold the same draw for me. But in some way it has led me to this blog. I needed something to replace Chamber of Secrets, it had been a part of my life for so long I couldn’t just let go of the online world all together. I have a Livejournal which is pretty much only followed by Chamber of Secrets friends so I kept updating that, then I joined the Bookclub Forum. My book blog started as a thread on there and after a while I decided to bring it to a larger audience.

I don’t think I will ever completely let go of Harry, he still holds a part in my heart, but he is less of my life now, and I think that’s how it should be. I’ve grown up with Harry, he’s important to me.

Must admit though I am still fairly excited to see Pottermore– although I am doubtful it will offer much new.