1) a lot happens for such a short book

3a) and in light of that Dumbledore is the stupidest genius

4) Considering Harry’s link to Voldy do his dreams in PS mean now than it seems? They are described in surprising detail

7) Why did Harry’s scar hurt at the welcome feast? Voldy wasn’t attached to Quirrell then and Harry didn’t get the same affect from shaking Quirrell’s hand

8) Chamber of Secrets next… my joint favourite 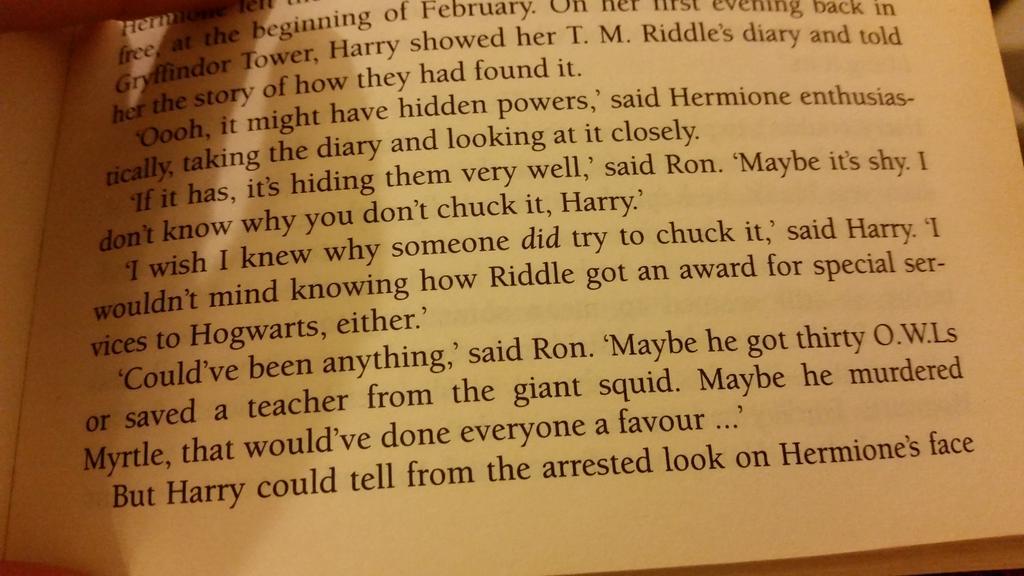 I’m Sure I remember writing thoughts for Chamber of Secrets, but I can’t seem to find them

1 ) you know what POA might be my least favourite *cue cries of horror* I know it is important plot wise but it doesn’t seem to add much. Not that I don’t still love it

The introduction of Lupin

3) If Lupin isn’t gay Sirius has to be

4) Whatever happened to Penelope?

7) Did Lupin really think Sirius being an animagus wasn’t something people needed to know?

8) Why was Sirius so insistent on killing Peter? He was the easiest way to show proof of Sirius’ innocence

So of course Harry gets it

1) How many girls actually are there in Hogwarts? It seems there are more boys

2) If the Patel twins are the hottest in the year why didn’t they get dates sooner?

3) This one took me longer this time, not sure why.

4) Charlie is the most underated Weasley. He works with dragons, that’s hot.

5) Harry is a real idiot sometimes

Touching an unknown magical substance with your finger is dangerous, but obviously touching it with your wand will be ok

7) If Barty Crouch Jr was a deatheater why did he teach kids how to fight the Imperius curse?
7a) yeah, yeah, I know it’s what Moody would have done

8) How would anyone ever be able to complete the triwizard tournament without cheating. I mean how do you just know how to get past a dragon? Who would think to open an egg under water? The only vaguely possible task to complete without cheating is the last.

10) Why did the films give do much Dobby material to Neville? It would have made Harry’s life easier if Neville knew his problem with breathing underwater

Order of the Phoenix

1) I really enjoyed it this time for some reason

2) I am still in denial about Sirius’ death

5) Umbridge is the worst. I actually hate her more than Voldy
5b) And it really irritates me that I can’t see Harry getting angry at her without seeing Daniel Radcliffe’s awful emotionless acting

6) The best fighting scenes are in this book

7) why is it that we know Fred and George passed a handful of OWLs when school finishes in GOF but the trio have to wait for the holidays?

10) Harry, it is time I told you everything… except that you’re a horcrux, because, you know, that’s not important…

1) My favourite along with Chamber of Secrets

3) I think I have finally accepted the Harry and Ginny thing. It was always just too expected, I wanted a coupling which wasn’t so set out from the start

5) I never got why they didn’t just try spilling the green potion. It probably wouldn’t have worked, but you know they didn’t even try

6) How do you actually learn to fight like Dumbledore? Harry really doesn’t seem equipped to fight Voldy

7) Here goes Harry being noble and stupid again. Does he really think Voldy wouldn’t use Ginny just because they spilt up?

8) Harry also doesn’t seem to be very equipped for finding other horcruxes, or destroying them. Couldn’t Dumbledore just have told him there are 7 horcruxes, here’s how you destroy them,and here are some awesome spells so you can actually defeat Voldy?

9) If Snape is the half-blood prince then why doesn’t Harry do better in potion lessons prior to this book? Does Snape just not teach the best method?

10) Luna is the best commentator

11) So close to getting another Horcrux

1) Whilst not my favourite Potter this has probably been my best re-read. I felt almost as hooked as first time round (although without having to read a bit if I awoke during the night). Probably because I haven’t read it as much so there were bits I had forgotten, or at least don’t know off by heart.

2) Lupin is such an idiot in this book, but still understandably so.

3) If Harry’s cloak is THE cloak of invisibility why can Moody see through it?

6) Neither do I think Snape is a big hero. He may not be a villan as such, but I don’t think his motives are completely good either

7) The epilogue still disappoints me

9) I can’t believe my re-read is over