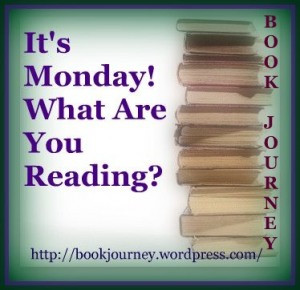 It’s been a while since I’ve taken part in It’s Monday! What are you reading?  (which is hosted by Bookjourney) but I have time to write the post this week so I thought, why not? Visit Book Journey for links to other blogs and to add your own.

Her Fearful Symmetry This book has been on my To Be Read (TBR) pile for so long. I love Niffenegger’s previous novel, The Time Traveller’s Wife, and I’ve heard mixed reviews of this one, so I was a bit anxious about being disappointed by it. It’s the story of two girls who inherit their aunt’s house, except her ghost is still living there. So far I am enjoying it, just not as much as The Time Traveller’s Wife

The End of Your Life Book Club is part memoir, part book about books. It mainly concerns Will and his mother. Will’s mother has stage 4 cancer (i.e. incurable). When in various waiting rooms Will and his mother start talking about the various books they are reading, and start reading and discussing the same books. It’s also a lot about how the mother and extended family cope with her illness. So far it’s actually been strangely uplifting, and I’ve added a few books to my wishlist.

A Beautiful Truth is a story about chimps. Louee who is adopted by a childless couple forms one part of the series, the other part follows chimps who are part of a language and social interaction study. I found it a little difficult to read but the plot was rather interesting.

Bing- Paint Day was my Children’s Hour pick last week. It’s basically a book about colours as it talks about what Bing is painting with different colours.

Added to the TBR

The Second-Last Woman in England is about the second to last woman to be executed in England. I won this book from An Armchair by the Sea

Dearly Devoted Dexter is the second book in the Dexter series. It’s been on my wishlist since I read the first, but I only just got a hold of it via bookmooch.

If you fancy winning a book too you can enter my giveaway of It Never Was You.

Filed under It's Monday! What Are You Reading?, Memes

Tagged as books, It's Monday what are you reading?, read, reading, review, to be read