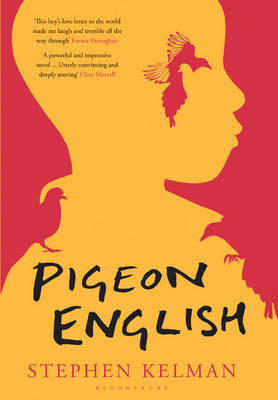 So it’s been a while since I’ve done this but I did promise to review extracts from all of the Waterstone’s 11.

You can read my reviews for:

The Coincidence Engine, The Sentamentalists, When God was a Rabbit (whole book review), The Tiger’s Wife, and, City of Bohane

Newly arrived from Ghana with his mother and older sister, eleven-year-old Harrison Opoku lives on the ninth floor of a block of flats on an inner-city housing estate. The second best runner in the whole of Year 7, Harri races through his new life in his personalised trainers – the Adidas stripes drawn on with marker pen – blissfully unaware of the very real threat all around him. With equal fascination for the local gang – the Dell Farm Crew – and the pigeon who visits his balcony, Harri absorbs the many strange elements of his new life in England: watching, listening, and learning the tricks of urban survival. But when a boy is knifed to death on the high street and a police appeal for witnesses draws only silence, Harri decides to start a murder investigation of his own. In doing so, he unwittingly endangers the fragile web his mother has spun around her family to try and keep them safe. A story of innocence and experience, hope and harsh reality, Pigeon English is a spellbinding portrayal of a boy balancing on the edge of manhood and of the forces around him that try to shape the way he falls. (from Waterstones)

Pigeon English has already been released and I’m quite eager to get a hold of a copy based on the synopsis. I think it would be interesting to see about the contrasting cultures and it sounds like it may be written in a pretty engaging way. Plus on a personal note it sounds like it could be set in the area where I work (although there are areas like it up and down the country). The added crime element I think will add some excitement, which may make it more readable and stop it being to slow or pondering.

I liked the tone of Pigeon English a lot, it reminded me of The Curious Incident of the Dog in the Night-Time, and looking at the synopsis again it may have other similarities. The tone was really innocent and child-like but talking about serious things, somehow it made some things seem sadder because it was almost brutally honest. I could really imagine that English was not the boys original language, or at least not the slang that he heard having moved to England. It was really simple and easy to read but I don’t think it lost anything from that, it just seemed more authentic.

It makes me more sure that it will be how I imagined from the synopsis, and I certainly would like to keep reading.

One response to “The Waterstones 11: Pigeon English”