I am not a big person for following book awards, I will look at books picked for awards- or which are awarded awards but I won’t read them just because they are given awards. Even so I happened to notice that The Costa Book Award winners had been announced yesterday and thought it might be nice to do a post on it. I’ve not read any of them but am interested in a few.

Jo Shapcott’s award-winning first three collections, gathered in Her Book: Poems 1988–1998, revealed her to be a writer of ingenuous, politically acute and provocative poetry, and rightly earned her a reputation as one of the most original and daring voices of her generation. In Of Mutability, Shapcott is found writing at her most memorable and bold. In a series of poems that explore the nature of change – in the body and the natural world, and in the shifting relationships between people – these poems look freshly but squarely at mortality. By turns grave and playful, arresting and witty, the poems in Of Mutability celebrate each waking moment as though it might be the last, and in so doing restore wonder to the to the smallest of encounters. (from Amazon)

Personally I’m not a big reader of poems so this wouldn’t really interest me. I will flick through a poetry book if I have one to hand but I won’t actively seek them out. It may be that this is a fantastic collection but in all likelihood I will never read it. 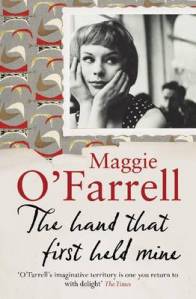 Fiction Winner
The Hand that First  Held Mine- Maggie O’Farrell

When the sophisticated Innes Kent turns up on her doorstep, Lexie Sinclair realises she cannot wait any longer for her life to begin, and leaves for London. There, at the heart of the 1950s Soho art scene, she carves out a new life. In the present day, Elina and Ted are reeling from the difficult birth of their first child. Elina struggles to reconcile the demands of motherhood with sense of herself as an artist, and Ted is disturbed by memories of his own childhood that don’t tally with his parents’ version of events. As Ted begins to search for answers, an extraordinary portrait of two women is revealed, separated by fifty years, but connected in ways that neither could ever have expected. (from Amazon)

This one sounds vaguely interesting to me. I get the impression that it could drag a little, but maybe that is because the synopsis is a little vague.
First Novel Award
Witness the Night- Kishwar Desai 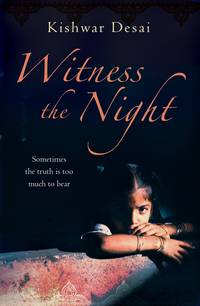 A highly atmospheric mystery set in India, with the controversial subject of female foeticide at the fore. Longlisted for the ManAsian Literary Prize. In a small town in the heart of India, a young girl is found tied to a bed inside a townhouse where 13 people lie dead. The girl is alive, but only just. She is arrested for the murders she is believed to have committed. Visiting social worker Simran attempts to break through the girl’s mute trance to discover the truth. Hauntingly real, and beautifully atmospheric, this ia a major debut. (from Amazon)

This one sounds much more me. A bit of a mystery, emotional. It may end up being a bit more crime focussed than I like but it doesn’t sound like it will.

The Holocaust swept Ephrussi and his glorious, cosmopolitan family into oblivion, and almost the only thing that would remain of their vast empire was the netsuke collection, smuggled out of their Vienna palace (now occupied by Hitler’s theorist on the “Jewish question”) in the pocket of a loyal maid, Anna—one carving a day for a year.

In this grand story, the renowned ceramicist Edmund de Waal, the fifth generation to inherit the collection, traces the story of a remarkable family and a tumultuous century. At once sweeping and intimate, A Hare with Amber Eyes is a deeply personal meditation on art, history, and family, as elegant and precise as the netsuke themselves. (from Goodreads)

This one is already on my wishlist, and down as a read for the Take a Chance Challenge. I’m not generally a bit reader of biography but this one sounds really good. There has been a lot of good things said about The Hare with the Amber Eyes in various reviews (and that’s part of the reason I picked it as my reviewer’s choice) and it was favourite to win.

‘If I stood you in front of a man, pressed a gun into your palm and told you to squeeze the trigger, would you do it?’

‘What if I then told you we’d gone back in time and his name was Adolf Hitler? Would you do it then?’

The war is over, independence has been won and Robert Mugabe has come to power offering hope, land and freedom to black Africans. It is the end of the Old Way and the start of a promising new era.

For Robert Jacklin, it’s all new: new continent, new country, new school. And very quickly he learns that for some of his classmates, the sound of guns is still loud, and their battles rage on . . . white boys who want their old country back, not this new black African government.

For him, there is still one last battle to fight, and he’s taking it right to the very top. (from Amazon)

When I first look at this book I didn’t realise it was for children,The Boy with the Striped Pyjamas. I think if it’s done well it could be really good, although it also looks a bit like it could be a little over the top and unbelievable

Have any of you read any of these books? Did you enjoy them? Do you plan on reading any.

You can find the full shortlist here on the Costa Award site.